TULSA, Okla. – Tulsa mother Miracle Foster is demanding answers from a Tulsa high school after she claims her 16-year-old daughter received a birth control implant while on a school field trip.

Foster contends her daughter attended a sex education session by Youth Services of Tulsa at Langston Hughes Academy, and later participated in a field trip to the group’s local facility that was arranged by school officials, Fox 23 reports. 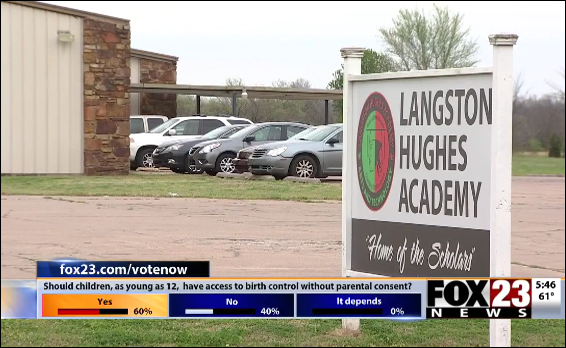 When the girl got home from the clinic, Foster said she noticed a mark on her arm and asked her about it. The teen told her mother she received a three-year Norplant birth control implant at the clinic without her consent.

“This has really been emotional on me, it really has,” Foster told Fox 23. “I just feel like my rights as a parent were violated.”

Langston Hughes Academy Principal Rodney Clark pointed out that Foster gave the girl permission to go with some of her classmates to Youth Services during the school day, and federal Title X laws allow children as young as 12 years old to receive contraceptives without a parent’s consent.

“I feel like the school is responsible. I think they should have gave us more information. I thought she was going to get information and educated, so she could come back home and we could discuss what was best for my child,” Foster said.

“My thing is my child went on a field trip, and she came back with this in her arm,” she said. “I was not aware that she was going to be getting this done. Had I known that this field trip was for her to get that done, I would not have allowed her to go.”

Clark issued a formal statement about the situation last week.

“This was not a field trip. Youth Services of Tulsa does an annual in-service on Sex Education,” he wrote. “They offer students an opportunity to contact them on their own for more information. The parent gave her child permission to leave the school.

“Under Title X, once young people are at the clinic and are of reproductive age, they can make decisions on their own without parental consent.”

Foster was unmoved by Clark’s explanation, and said she was already taking a proactive approach to her daughter’s sexual health before school officials and Youth Services staff intervened.

“I think it’s something that a mother and daughter should discuss. Not only just talk about the birth control, but the different STDs – just educate her and give her information – and let her know my life stories,” said Foster, who broke into tears during the Fox 23 interview.

“I just did not expect this, and like I said, it was not a choice. That was the last choice I had for her, and we had discussed birth control, so I was going to make an appointment for us both to go in and get something, you know.”