School suspends student over unauthorized hairstyle — two lines instead of one

BAYTOWN, Texas – Officials at a Texas junior high school are threatening a student with suspension over a haircut with two lines shaved in the side, and the boy’s parents think it’s ridiculous.

Cedar Bayou Junior High School sixth grader Xavier Davis told KPRC he was ordered to the office last Thursday when school staff noticed his hair had one more line buzzed in than school rules allow, and was threatened with in-school suspension if he didn’t get it fixed. 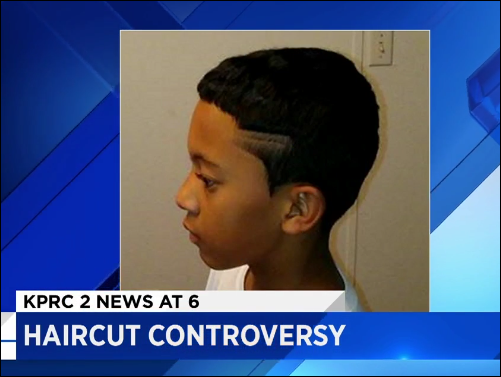 “I was walking to class, and she saw my hair and said, ‘You can’t have two lines in your hair. Go to the office,’” Davis said, adding that officials gave him until Monday to correct the situation or face the consequences. “I don’t think it’s fair.”

Neither does his father, Matt Davis.

“He’s had his hair cut like this for six months and now all of a sudden it’s a problem?” Matt Davis said.

“Letters, symbols, and designs beyond a single straight line which draw attention to an individual shall not be permitted,” the dress code reads. “The administrator/supervisor reserves the right to determine if a hairstyle is disruptive to the educational process.”

There’s no evidence that Davis’ extra line in his hair was “disruptive,” but his parents were forced to fix it nonetheless. After a day in in-school suspension, the 12-year-old’s mother took matters into her own hands.

“He had a space here and a space there,” Matt Davis said. “She took a Sharpie permanent marker and colored the bottom of his hair in, so in order for him to get an education, we have to treat his hair like a coloring book, I guess.”

The father thinks school officials are taking their “right to determine if a hairstyle is disruptive” a little too far.

Aside from providing a copy of the student dress code, school and district officials refused to discuss the situation further.

Folks online, however, had plenty to say.

“But if he grew his hair out, put it in pigtails and changed his name to Xandi, he’d be called brave,” Zombiedawg_67 posted in the KPRC comments. “Kids nowadays have no chance.”

“Two lines gets you sent to the office,” Ken Phillips added, “but if he put on a dress he’d be celebrated.”