SANFORD, N.C. – A North Carolina teacher and his wife are calling for a stiff punishment for students who allegedly poured dry-erase cleaner into his soda, a nasty concoction that forced the teacher to seek medical attention. 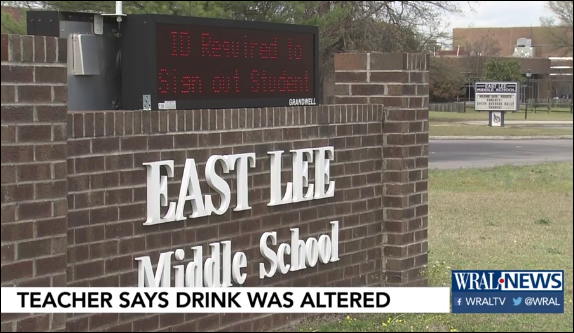 Lee County Schools bans employees from speaking to the media, but Jennings’ wife said another teacher later informed her husband that two students spiked his soda with dry-erase cleaner. Students reported the incident to Jennings’ colleague.

“They had actually taken it off the desk, opened the cap, poured the expo cleaner, put the cap back on and put it back on his desk,” Marie Jennings said. “The headache and the nauseousness was the worst thing, and then later that evening, he had abdominal pain, which he ended up at Moore Regional (Hospital) the next day for.”

District officials confirmed they are investigating the incident, but refused to discuss details, including what, if any, punishment the students might face, WNCN reports.

“The principal responded immediately when notified of the matter shortly after it occurred, including taking steps to ensure the teacher’s health and alerting the proper authorities,” according to a prepared statement. “The district takes this incident very seriously, and investigation by the appropriate school officials continues.”

Marie Jennings said her husband was sick for three days from the cleaning concoction and is now nervous about returning to school to deal with his tormentors.

“He has to go back and face these kids every day,” Jennings said.

The couple is now pushing for a stiff punishment against the students – from both the school and legal system – that will convince other hoodlums to think twice about attempting similar stunts in the future.

“If these two kids don’t face any kind of accountability, is someone else going to try and do this to him?” Marie Jennings questioned. “Is he going to be the teacher that ‘Oh, nothing happens when you mess with him, so pretty much do what you want?’ That worries me.”

District officials told WRAL that regardless of the outcome, they will not inform the public about any punishment levied against the students.