TWIN FALLS, Idaho – Twin Falls High School is a “battle zone” for transgender rights that’s too hostile for some LGBTQ students, who allege they were harassed during the school’s “blue versus pink” spirit week day.

The student council changed its annual “boys versus girls” spirit week event to a “blue versus pink” day to accommodate transgender students. But some transgender students and their friends decided to wear purple to school on Friday to protest tradition and they didn’t receive the reaction they were hoping for, the Twin Falls Times-News reports. 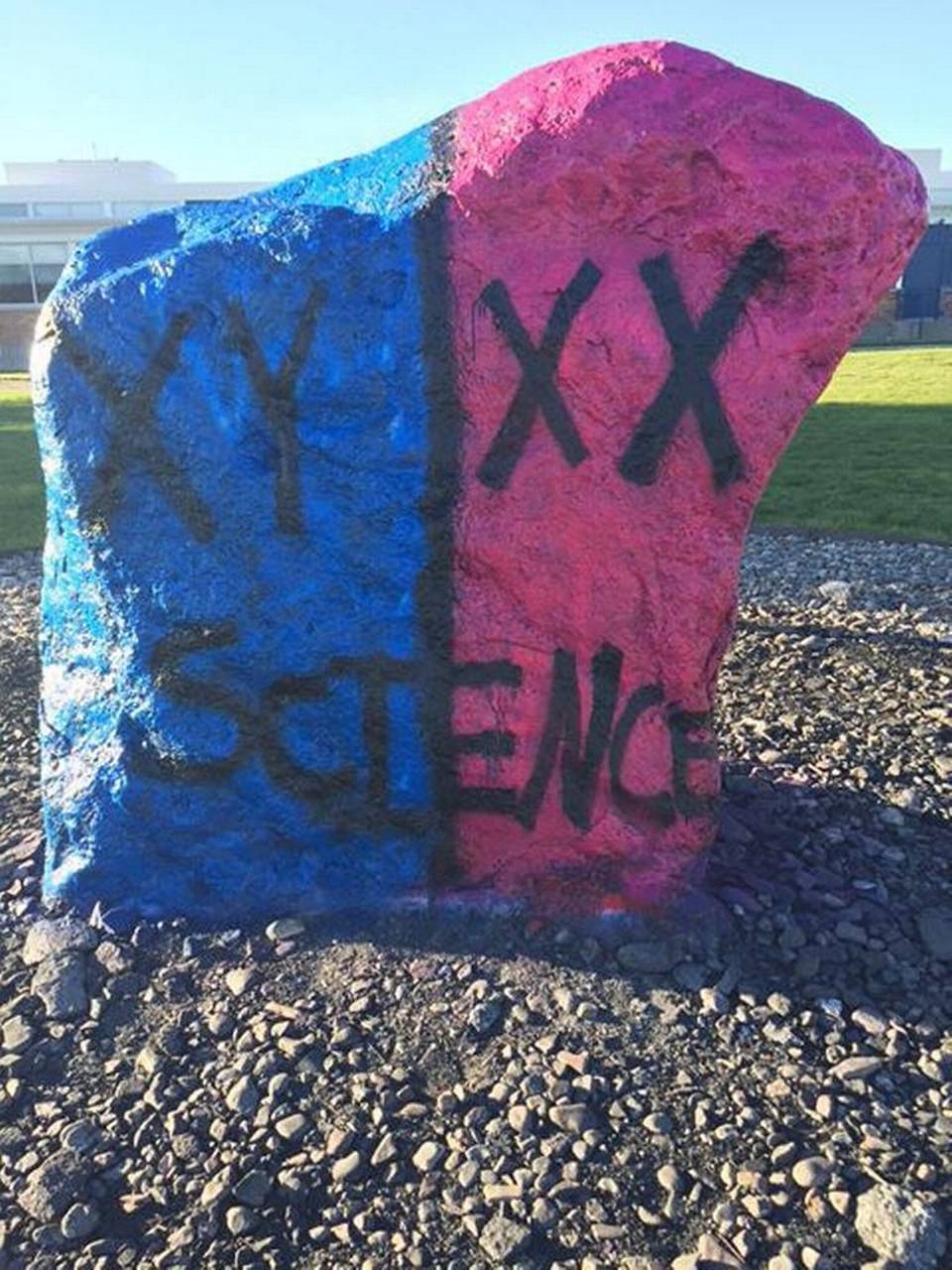 Transgender students put up posters announcing the purple protest, but “within a few hours, most of them had been scribbled on or taken down,” an unnamed student told the news site.

“That made me feel kind of bad about it but there wasn’t emotion until the next day,” the student said.

“It was a pretty hostile in the hallways all day, apparently,” Blair said, adding that students endured comments like “boys have a penis and girls have a vagina” from their peers.

“For students who are gender variant, it was a particularly intense day,” she said.

Blair alleges students who walked into one classroom were met with the message “transgenderism is a mental disease” scrawled on the chalk board, but it was quickly erased without discussion.

There was also controversy surrounding the school’s massive rock in front of the main school building, and a spirit assembly on “pink versus blue” day.

Protesting students who wore purple to school were left in a conundrum when they attended the assembly, which was divided into two groups: pink and blue.

“What I saw was just repulsive, and it made me feel ill,” 14-year-old Ryan Flores told Times-News.

Flores, who wore purple, said the situation gave him a panic attack.

“I didn’t feel like I was being thought about or valued,” Flores said. “I was basically being told I didn’t exist but I know a lot of people have it worse.”

Another unidentified student said the assembly was awkward.

“I felt scared for them because they were lost and in pain about the school not accepting everybody,” the student said.

After the assembly, students found the school’s rock painted over in half pink and half blue, with the international signs for male and female. “Tradition is Tradition,” was also written on the rock, the Times-News reports.

An image of the rock was posted to social media with the caption “F**k that transgender bulls***.”

“It was kind of like a slap in the face after a rough day,” Blair said. “Then the social media began.”

LGBT students painted over the rock in school colors with the messages “All Bruins United” and “No H8!” but it was painted red hours later with “Netflix and Chill?” and “Hulu and Commitment,” sprayed on the side.

Blair said some students have been too scared to go back to school, so they’re going to her house instead.

Flores told the news site he went to school Tuesday but text messages about the situation and controversy surrounding the school rock sent him into a panic attack during his first period and he checked out for the day.

District officials, meanwhile, pointed to the district policy on sexual orientation that states school dress codes must be gender neutral, “including (dress codes for) the traditional school day, school activities including dances/prom, and graduation,” the Times-News reports.

District spokeswoman Eva Craner also said the district’s non-discrimination policy “would cover any form of expression on our campuses,” including painted rocks, but said specific policies for school rocks might “be something that administrators will look at now.”

Twin Falls Superintendent Willy Dobbs acknowledged that the spirit week day did not go as planned, and urged students to treat each other with respect, KMVT reports.

“It’s meant to pull the school tighter together and in some cases, like this one, maybe we didn’t achieve the ultimate goal that the students had,” Dobbs said, “but they were trying.”

“In any situation the golden rule is a good one to follow,” he said. “Treat people how you’d like to be treated yourself. Be understanding and helpful with one another, not hurtful.”