TEAGUE, Texas – A group of fourth grade boys in Texas told their parents Teague Intermediate School Principal Vickey Little forced them to rub the cafeteria floor with their hands, then lick their fingers. 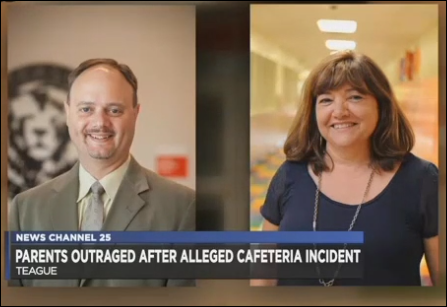 “They were told to sit down. The principal told them the reason they were in there was a bad word was written on the wall and that nobody would admit to who did it,” parent Adrienne Acosta told KXXV.

Acosta said Principal Vickey Little imposed the punishment on her son and other fourth graders on Friday, when she created a firestorm with a Facebook post about the allegations and several other parents confirmed their children gave the same account.

“Answer me this Intermediate Teague since when is it ok for you to punish all fourth grade boys for something being wrote on the wall in the boys bathroom by having them all sit in the cafeteria rub they (sic) hands on the floor and then make them lick there (sic) hands…,” the post read.

Acosta said she couldn’t believe a school officials would concoct such a disgustingly inappropriate punishment.

“It was like a nightmare. I was like, ‘Are you serious?’” she said. “So I asked my son, ‘Did you really lick your fingers?’ and he said, ‘Yes, she was standing there watching us do it.’”

“When I went to school, we had punishment as far as writing sentences. It could’ve been something done different than them to sit there and lick their hands off this nasty floor,” Acosta said.

Little initially shrugged off the accusations when contacted by KXXV on Saturday.

“You will have to contact the superintendent,” she wrote. “Don’t believe everything you (hear) on social media.”

Parents demanded a meeting with Little and Teague Independent School District Superintendent Nate Carman on Monday, and Little allegedly admitted to doling out the punishment.

“(Little) admitted it, that she did tell them that,” grandparent Lisa Echols said after the meeting. “She doesn’t need to be principal at all. I hate to see anybody lose their job. And when you want to make some kids do this, I wouldn’t do my dog like this. I wouldn’t do an animal like this. There’s a way to treat and handle situations.”

“She did admit it, and it shocked me … because we all looked up to her and we all know her, and that’s not the kind of person she is,” parent Latresha Phillips told KXXV.

Carman wouldn’t discuss details, and instead issued a prepared statement about the meeting.

“We met with parents who came to the Intermediate this morning and listened to their concerns,” he wrote. “This situation is still being investigated.”