School suspends teacher for speaking out about rampant bullying

NEWPORT, Ky. – A Kentucky teacher has been suspended through the rest of the school year for speaking out about bullying in her elementary school that she claims administrators have failed to address.

“It got really bad a few weeks ago when they said they would address it … and nothing has been done about,” Newport Intermediate School third grade teacher Lila Campbell told WXIX. “On Friday, it came to a head where … my class was like in a race war. It’s to the point where if I call the office I know they are not going to do anything, so I am trying to break up seven kids from getting in a huge fight.” 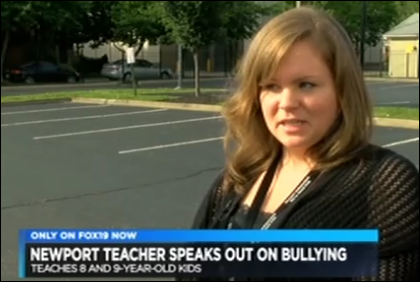 Campbell provided the news site with numerous emails she’s sent to school counselors to request help with aggressive students, including one that details a student who claims “she’s pregnant with a demon child.” The same student allegedly went after a classmate who denied the girl’s claims the two were dating and “smacked him in the face,” according to the teacher’s emails.

The allegedly pregnant student also claimed “white people used to rule the world and black people are re******,” Campbell wrote, according to WXIX.

The teacher’s decision to speak up comes a week after the news site highlighted a video recorded in a local school showing a student bullying a classmate as another student recorded the incident.

Campbell said the video, which sparked outrage from parents, is simply business as usual in the Newport Independent School District.

“I thought that video that was brought to you before shows something that happens every day,” she said. “I’ve seen a kid thrown on the floor and I’ve called administration and they pulled the kid for about two minutes and sent him back to class.”

The emails show Campbell has repeatedly requested help, and none came.

“I called the office yesterday on him and nobody ever came,” she wrote in one email.

“I just want them to step up and show the kids that there is a boss in the school and it’s not them, and show parents you’re going to be involved so parents don’t feel like they have to take it upon themselves to solve these problems,” Campbell said.

District officials issued a statement about the bullying allegations, then suspended Campbell for three days without pay.

“The school district is aware of the situation. The school counselor has been working to resolve the situation and the issues between these two students,” the statement read. “The safety of our students is a top priority and our full attention is being given to this matter.”

Campbell told WXIX in a follow up story that NISD alleged the suspension is for conduct unbecoming of a teacher and for allegedly violating board policy on electronic media that does not “promote student learning and communication.”

“They said what I said was untrue,” Campbell told the news site. “And I know I shared emails which I shouldn’t have, but what I said was not untrue and I have had several parents call me and message me, emailing me and supporting me … so I feel good about what I did.”

District officials refused to discuss the bullying problems with WXIX.

“I had kids coming to me this morning crying and hugging me because I stood up for them,” Campbell said. “They feel that I am trying to make a difference for them and give them a better school to be in.”

Campbell told WXIX she plans to move on to a different school district next year.