EASTHAMPTON, Mass. – Last week, an Easthampton High School officials refused to punish a student who wore a Confederate flag sweatshirt to school, stating the shirt was protected free speech unless it caused a sincere disruption.

So social justice crusaders at the school and their parents staged a massive disruption on Monday to force officials to ban all clothing with images of the rebel flag, and they got exactly what they wanted, the Daily Hampshire Gazette reports. 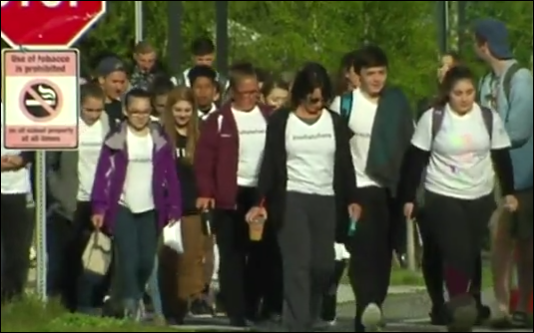 “Today and tomorrow the Confederate flags is not going to be allowed in Easthampton High School,” Principal Kevin Burke announced over the loud-speaker as the social justice warriors gathered for a sit-in in the school’s Café Commons. “And the School Committee will be meeting tomorrow to make further determination.”

Dozens of students wore white t-shirts with the slogan #nohatehere and marched up and down the street during morning classes on Monday, then moved to the Café Commons. School officials excused student absences through noon for the event.

Several parents who attended told the media the protest was a direct response from those who don’t like the Confederate flag, and the sole purpose of the event was to create the necessary disruption to ban the symbol from the school.

“Being biracial, I fell that I need to be part of this,” sophomore Marissa Dunham told the Gazette. She participated in the tantrum with her mother, Shannon.

“I have not faced discrimination directly, but once it happens to one person it affects us all,” she said.

Senior Isabel Poirier told WWLP the goal of the protest is to ensure that all students feel “safe” at school, and she alleged many do not.

“It’s such a fragile situation, we need plans happening right now to make sure kids now feel safe,” she said.

“I’ve had a lot of my friends even, a lot of people text me saying can you please help me, I don’t feel like I can stand up,” Poirier alleged. “Can you stand up for me?”

Michelle LaPlante, mother of a biracial sophomore at the school, said she attended the roughly 20-minute rally because she thinks it’s the right thing to do.

“I look around and I see the town changing, and it makes my heart smile to see the changes, but I know there are people here who are afraid of those changes,” she told WWLP.

The protest is the second in recent months, and followed a demonstration in late march in which about 200 students walked out of school to the Municipal Building to complain to district administrators about how they handle racial incidents.

That walkout came the day after a student who posted an allegedly racist comment on social media was assaulted in a school parking lot, the Gazette reports.

All of the folks interviewed by the news sites favored the ban on Confederate symbols, and neither bothered to interview the student harassed for wearing the Confederate flag sweatshirt to school last week.

“I think that it was definitely a step in the right direction,” senior Eamonn Graeme said of the new ban, adding that she equates the symbol to hate. “It’s the kind of progress we’ve been wanting.”

Perhaps ironically, Easthampton held an assembly for all students on Monday to promote social justice with the help of Collaborative for Educational Services, WWLP reports.

“I hope students feel the message is being herd and I know some students feel frustrated,” school committee member Peter Gunn told the news site. “But I do think the conversations going on this morning and others that we have planned are designed to give students an opportunity not just to say things, but to truly be heard.”

Gunn said the school committee with discuss the future of the Confederate symbol ban during a board meeting Tuesday dedicated to the theme of fighting racism.

Public School Review reports 13 percent of Easthampton High School’s roughly 450 students are minorities, and most of the minorities are Hispanic.