SANTA CRUZ, Calif. – A mob of social justice students commandeered the University of California, Santa Cruz’s administration building Tuesday to demand the school paint a dorm on campus in “Pan-Afrikan” colors, among other things. 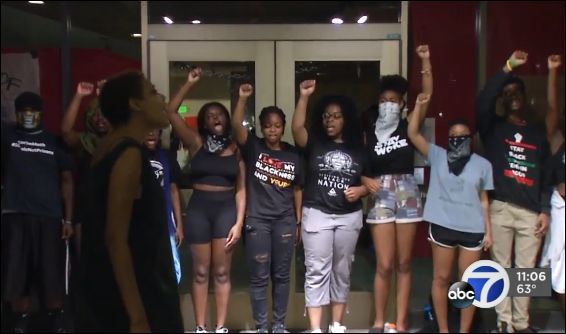 “We demand that the university fund the ENTIRE exterior of the Rosa Parks African American Themed House being painted Pan-Afrikan colors (red, green, and black) by the start of spring quarter 2017,” students with UCSC’s Afrikan Black Student Alliance wrote in a list of demands to school officials. “These Pan-Afrikan colors represent Black liberation, and represent our diaspora, and the goals of our people.”

Hundreds of students stormed into Kerr Hall around 1 p.m. Tuesday and have refused to leave until university officials heed all of their “uncompromisable demands,” locking some doors with chains and stacking furniture in front of others, KGO reports.

They’ve stockpiled food and posted social justice messages in the windows, and now they’re mostly loafing around on the floor, sleeping and playing on their computers, while they wait for school officials to deliver on the demands, according to NBC Bay Area.

Organizers contend they had “no other choice” than to stage their collective tantrum.

The current Rosa Parks African American Themed House is part of a larger student housing complex where all of the buildings are white. The students contend the paint job is necessary because “throughout western history, ABC folks have been pushed into the margins of western society.

“Currently, ABC students are being pushed into the margins of UCSC housing,” they wrote.

The ABC students want “visibility, pride and a safe haven within this predominantly white institution,” and believe “painting this house with Pan-Afrikan colors will revive the goals and purpose of R.PAATH.”

UCSC spokesman Scot Hernandez-Jason told KGO the chancellor sent the students a response that included “an explanation of what we’re working on – what we’re able to do and what we’re not able to do – and there’s a variety of reasons for each situation.”

College officials told NBC Bay Area “the protest is peaceful, and our focus is on ensuring the safety of staff who work in the building and of the students who took over the building.”

“We’ve taken some steps forward, including hiring a recruitment specialist and a retention specialist, and continue to discuss how we can make sure that all students feel supported and have a sense of belonging,” the statement continued. “The campus is sensitive to the needs being expressed by the students.”

Chancellor Blumenthal is reportedly scheduled to meet with the social justice warriors on Thursday.