READING, Pa. – A second Pennsylvania school district is facing litigation over the practice of paying the full salary and benefits of educators released from classroom duties to work for their union full time.

Americans for Fair Treatment filed a lawsuit against the Reading School District over “ghost teachers” who have received more than $500,000 while working for the Reading Education Association, Fox News reports. 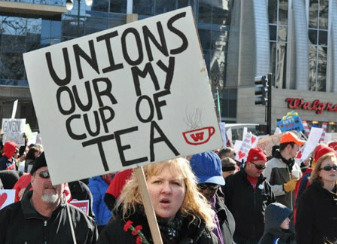 The practice, also known as “union release time,” is written into more than 20 percent of the state’s 500 school districts, according to a survey by The Commonwealth Foundation. Unions are expected to reimburse schools for the expense in many cases, but it’s unclear if they ever do.

State lawmakers are working to ban the largely secret deals, and the litigation in Reading follows a similar lawsuit filed by a former Allentown school board member against the local district, its teacher’s union and the state school employee retirement system, EAGnews reports.

“In addition to siphoning money from the district to pay their salaries, Reading’s ghost teachers have been illegally boosting their pensions while working for the union,” Sweigart said. “That’s why, separate from this lawsuit, the Fairness Center has filed a formal complaint on behalf of a Public School Employees’ Retirement System (PSERS) member and Americans for Fair Treatment, asking PSERS to revoke any unearned pension credits from Reading ghost teachers.”

Sweigart pointed to Reading Education Association President Mitch Hettinger, who draws salary and benefits worth $131,000 to work full time for the union and will collect a pension based on that compensation when he retires this year.

The lawsuit points out that despite financial problems that forced hundreds of layoffs in 2012, the union and Reading school officials continued the expensive perk.

“These teachers were forced from their classrooms while their union president continued to receive full salary and benefits,” Sweigart said.

“Facing a $10.4 million budget deficit, the Allentown School District has been forced to make deep cuts,” Watchdog.org reports. “Over the last four years, the district laid off more than 466 employees, including 272 teachers since 2011. Layoffs are expected to continue for the next two to three years …”

But despite the district’s dire financial straits, the district has covered the full salary, benefits and retirement costs for Allentown Education Association President Debbie Tretter, who works full time for the union.

Tretter’s salary alone is $81,608 a year, and the district has covered that expense as well as benefits for the union president for more than 25 years, totaling more than $1.3 million with interest.

Former Allentown School Board member Scott Armstrong initially tried to end the practice through board action, then resorted to a lawsuit when he was shut down.

“We are trying to end a practice that is currently costing the district $81,608 plus benefits annually,” Armstrong told The Morning Call. “That will be a significant savings to the taxpayers and the district if the court provides a remedy. … This legal action would not be necessary if the board would move to end the practice.”

“The district has been in financial distress for many years,” Armstrong’s lawsuit reads. “Yet despite its financial woes, since 1990 the district has somehow had enough money to pay the salary and benefits of an individual who doesn’t work for the district. …

“It’s time for the AEA president to either get back in the classroom or off the public dole.”