HILLSBOROUGH, N.C. – Orange County Schools’ board of education voted Monday to ban “racially intimidating” clothing amid concerns from the public about Confederate symbols on campus. 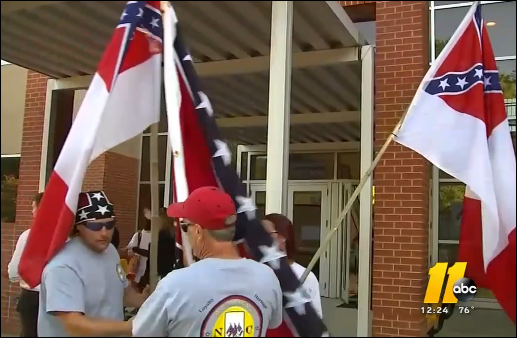 Strong and her supporters urged the board to ban Confederate flags at a February school board meeting, and board members responded with changes to the district’s student dress code this week.

Students are not to wear clothing, buttons, patches, jewelry, or any other items with words, phrases, symbols, pictures or signs that are indecent, profane, or racially intimidating that create a reasonable forecast of disruption.

The change does not address the issue of Confederate flags on vehicles at school.

The district’s attorney said the policy included the phrasing of “a reasonable forecast of disruption” to avoid allegations the district is infringing on students’ free speech rights, but the social justice advocates calling for change were not satisfied.

Instead, many would argued for an outright ban on the Confederate flag under all circumstances, rather than leaving the issue to the discretion of school principals. 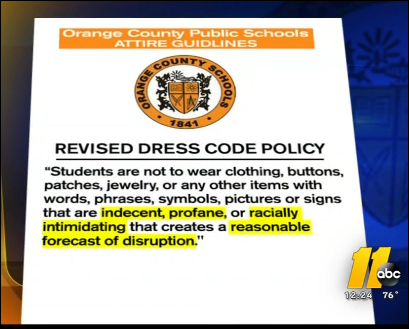 “Like to cause a disruption or reasonable forecast of disruption, that doesn’t make sense, because that’s essentially the policy we have now,” parent Stacy Sewell complained to the board.

The board initially deadlocked on the policy with a 3-3 vote, because some board members agreed with SJW advocates who wanted to ditch the wording about “a reasonable forecast of disruption.”

Board member Brenda Stephens was among them.

“I just have a level of discomfort with that,” she said. “I would like that period after intimidating.”

The board eventually decided to ignore the advice of their attorney and eliminate the “reasonable forecast of disruption” from the policy.

“It felt like a win to me,” Strong told WTVD. “We’ve shown that when the community stands up and speaks for the people, we can get change and we can see the kind of school system that we want.”

The school board must still approve the dress code policy change at its next meeting on June 26.

The policy change, however, does not specifically address the Confederate flag or ban the flag from vehicles at Orange County schools, the Herald Sun reports.