MADISON, Wis. – A social justice class at James Madison Memorial High School is inspiring one student to take action to change the school’s name over ties to slavery that make her feel “unsafe.”

“Hello, my name is Mya Berry and my school is named after a slaveowner. James Madison, the 4th president of the United States was an owner of over 100 black slaves. The significance of this name in association with my school has a negative effect on memorials black students,” the senior wrote in a petition posted to Change.org.

“The lack of representation I feel in this school makes me feel more than unsafe. I do not feel supported by the majority of staff at memorial, especially considering the fact that I’ve gotten called n word multiple times, along with having an individual threaten me by telling me they would lynch me.” 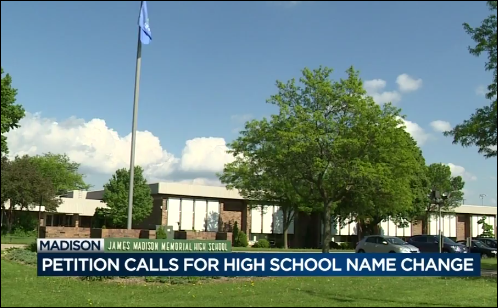 Berry told The Capital Times she never reported the incidents, which allegedly occurred in prior school years, because she “didn’t feel safe” at the time.

“In my classes when discussing race, I’m told my perspective is just an opinion, and not anything valid to take into consideration. My school has had dress up days such as pimps and hoes, and the girls varsity soccer team had cornrows in their hair, as if my culture is some dress up day, and something to joke about,” Berry complained in the petition.

She also read the petition out loud during the public comment portion of a recent Madison Metropolitan School District board meeting. James Madison Memorial High School received its name in 1967.

“So my thought to leave you with is this: with all of the injustice I and others face in James Madison Memorial High School, do you truly think it’s appropriate to glorify a man that enslaved my ancestors?” she continued. “With the education disparity between black and white students being a huge concern in the Madison Metropolitan School District, and if you truly care about black students, you would change the name of memorial high school.”

According to The Cap Times:

Berry said she was inspired to start the petition after watching a documentary about the history of enslavement. Currently, she is enrolled in a social justice class where her teacher asked students to consider the type of change they want to make in the world.

“This is my social change,” she said.

She also played up the ties to slavery in a broadcast interview with ABC 10/13.

“My ancestors were slaves,” she said, “I don’t want a slave owner representing who I am in this modern day.”

Madison, Wisconsin is named after the 4th president of the United States and founding father from Virginia, who reportedly inherited over 100 slaves along with a plantation from his father, James Madison, Sr., according to The Cap Times.

He was one of 18 U.S. presidents who owned slaves.

“I have met and will continue to meet with Ms. Berry and other student leaders, to discuss how we can best move forward. I want to truly hear their perspectives, and to determine how I can best support them,” he wrote.

Berry told the news site she plans to continue to push to change the school’s name, and has already set her sights on other schools in the district.

“There’s also Thomas Jefferson Middle School right next door,” she said. “He was also a slave owner, so maybe that one can be the next one.”