Principal Mick Wager confirmed in an email to parents that an investigation into the school’s recent student body elections showed the races for 2019 Class President, 2019 Class Secretary and 2018 Class President were rigged by a school employee, The Press-Enterprise reports. 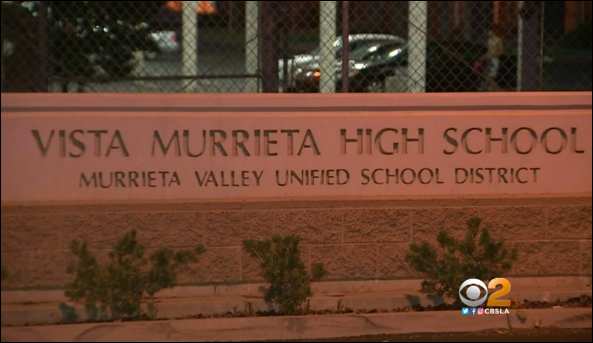 “An audit conducted by the electronic voting service has verified that no other election outcomes were affected by the voting irregularities,” he wrote. “This is a very unfortunate and disappointing situation, and I regret the impact it has had on the students involved and the student body as a whole.”

It’s unclear whether the unidentified teacher will face any type of punishment.

“Obviously it was a serious lapse in judgment and the school is committed to righting the wrong,” Parris said.

“On Monday, June 19, the school’s website listed Denise Peterson as a teacher who had an ASB class on her schedule,” according to the PE. “The page was updated Tuesday to remove the ASB class as well as her entire schedule. Peterson did not immediately respond to an email to her school account.”

Vista Murrieta parent Wade Sine told the news site he raised questions about the election after some complained about the results of a popular male conservative candidate. He attended meetings where officials and Peterson, who he identified as the advisor, analyzed the voting results and IP addresses used during the election.

“Many of the votes, he said, were made at 10:30 p.m. or later, in 40-second increments, by someone who appeared to be going down a list alphabetically and voting for certain candidates,” the news site reports.

The Associated Press reports the motive for the election rigging remains unknown, and no other students or staff were involved.

The three announced winners will vacate their seats for the real winners, according to CBS Los Angeles.

Parris also told the PE the students who were fraudulently elected will have roles with the ASB, and the district instituted new policies to prevent vote manipulation, though she did not elaborate on the details.

Sine and others, meanwhile, are pushing for a fresh election, though that seems unlikely, according to the news site.

“As an adult, and as someone the kids probably look up to, doing something like that is really low and I definitely think they should have some type of consequence,” one unidentified student told CBS Los Angeles.

“Wow, liberals defrauding an election … who would have guessed?” Noindex posted in the PE comments.

“If it weren’t for the actions of an alert parent, it would never have been discovered,” Barrie Britton posted. “The school’s actions are more of a cover-up than a corrective action.”