The girls filed the lawsuit Friday in U.S. District Court against the Jordan, Canyons and Granite school districts, as well as the Utah High School Activates Association and the superintendents of each district, The Salt Lake Tribune reports. 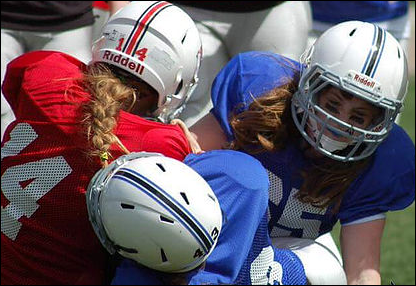 About 100 of those girls are now in high school, and they’d rather play for their high school than for club or recreational leagues.

“Girls would rather play for high school teams rather than recreational teams, the parents write in the suit, because they’d have the support of cheerleaders and a band and could earn accolades that are considered by colleges.”

Creating official school teams would also allow them to compete for state and regional championships that are documented by local news, and earn physical education credits toward graduation, the parents wrote.

In late May, the Herriman Mustangs went undefeated to win the first state title in the Utah Girls Tackle Football League. League President Crystal Sacco told the South Valley Journal that the program is growing fast.

“We have 210 girls signed up this season,” she said. “We more than doubled our numbers. The first year we only had about 60. Our volunteers talked it up and we recruited. The league is still learning, and we have had some things change, but it has been so successful.”

Herriman senior Laso Latu is one of three sisters on the team’s offensive line that played a key role in the team’s championship.

“It is my first time to play,” Latu said. “I love my team and how they give me confidence.”

Mustangs coach Brent Gordan said he focused on showing the girls the basics and the teens embraced the game with passion.

“It feels fantastic to be the first-ever state champion,” he said. “We had a really talented group of girls. We started out teaching fundamentals, and the girls from day one were making the big hits and good blocks. It was our strategy to follow those big blockers. The whole season they were solid.”

“Unlike the boys teams that practice six days a week for hours each day, we only do two hours twice a week,” he told the South Valley Journal. “We try to keep it simple. Football provides opportunity for all the girls. Skill players can play and so can bigger girls that can shine. It gives self-confidence for all of the girls.”

Officials in the Granite and Canyons school districts acknowledged the lawsuit and contend that schools typically manage sports programs based on demand.

Granite district spokesman Ben Horsley said he believes the district provides an “appropriate amount of school activities for our students, regardless of their gender.”

Horsley said “less than a handful” of curls in the district currently play on the boys’ football teams.

Canyon district spokesman Jeff Haney would not discuss the lawsuit, but told the Tribune that “because of demand” officials recently added boys and girls lacrosse to its UHSAA-sanctioned sports offerings.