FALLSTON, Md. – A grandfather of a 2017 Harford County Public Schools graduate wants the school board to know the school system is turning out illiterate graduates.

“I am appalled that a graduate of high school in this county couldn’t read a note I wrote,” Jim Hudson told the board at a July meeting. “You … on purpose graduated students who are illiterate.”

Hudson told the board he wrote a note to the recent graduate of Fallston High School in cursive. The girl looked it over and stuffed it in her pocket, telling him she would read it later. Hudson said she didn’t read it right away because she did know how, the Baltimore Sun reports. 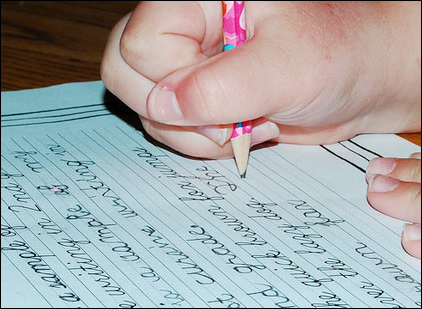 “I was dismayed. They are illiterate on purpose,” Hudson said, adding that the inability to read cursive puts local graduates at a disadvantage in the real world. “Why are you doing it to these children?”

The district’s chief of administration, Joseph Licata, confirmed that the district doesn’t require students to learn cursive, though he wrote in an email to the Sun that “through the use of primary resources and exposure to other publications, students are exposed to cursive writing.”

“We have no response to Mr. Hudson’s comments other than we are sorry he feels that way based on his experience with one graduate of our school system, but we thank him for his input,” he wrote.

Officials in other places are taking the issue far more seriously.

“When you see a 17 or 18-year-old student struggle to sign their name, it can be painful,” she said.

“It’s just something that has become extinct. Students don’t know how to write in cursive. They just don’t,” Webster County High School assistant principal Cara Phillips added. “It is a skill that everyone needs to do especially today. We just can’t be without it. To be successful, to move ahead in every job, I think that you have to have that.”

“I think that it is really important. In AP U.S. history we are required to read documents that are in cursive and some students can’t do that,” junior Hunter Donahoe said. “It makes it a lot easier than having to transfer stuff over. My teacher writes in cursive and you have to sign your name in cursive. I think it makes your handwriting neater.”

Lawmakers in some states are coming to the same conclusion.

Cursive instruction is now mandatory in Louisiana after lawmakers approved a bill in 2016 to take effect this year.

“The cursive writing legislation requires public schools, including charter schools, to introduce cursive writing instruction by third grade,” the Associated Press reports. “Instruction will have to continue through 12th grade, under the measure sponsored by Republican Sen. Beth Mitzell, of Franklinton.”

The Kentucky Department of Education is also mandating cursive writing instruction for students for 2017, in part because graduates were struggling in the real world, The Winchester Sun reports.

The lessons will start in kindergarten and progress through at least third grade in hopes “to have students proficient enough in cursive from their elementary years that they have a choice of using either that or printing in the years to come,” according to the news site.

“Children really weren’t learning cursive,” Clark County Public Schools Chief Academic Officer Brenda Considine said of the previously optional lessons. “So in today’s world, if one of them got a job where they would be reading cursive, they struggled to read it and respond to it.”