Chicago mother Asia Gaines contends her son’s teacher kept two thick leather belts in her classroom named “Mr. Brown” and “Mr. Black,” and when her son met their wrath last September, it left him with physical and mental wounds that have yet to fully heal months later.

“I am very angry about what happened to my son,” Gaines said at a press conference announcing a lawsuit against Chicago Public Schools, teacher Kristen Haynes, and the teacher’s friend, Juanita Tyler.

“I point the finger at CPS because school is a safe haven for kids, and kids are supposed to be protected no matter what,” Gaines said. “Teachers are supposed to protect kids from hurt, harm or danger, and she failed to do so.”

The lawsuit alleges Haynes not only failed to protect Gaines’ 9-year-old son, Jo’Maury Champ, she arranged to bring in Tyler to physically assault the child with the belts, WLS reports.

The family’s attorney, Al Hofeld Jr., said Jo’Maury angered Haynes the day before the incident last September, when he was laughing with another boy in class. The lawsuit alleges the next morning Haynes and Tyler, a distant relative of Jo’Maury he doesn’t know, “physically grabbed him and dragged him down the hallway to the boys bathroom,” according to the Chicago Tribune.

The family contends Haynes, 50, supplied Tyler with the two leather belts and returned to the classroom.

According to the lawsuit, once alone in the bathroom with the boy, Tyler, 56, commanded that he pull his pants down and when he refused, she “lost her temper and began striking the boy” over his clothes with the belts, “landing blows on his back, buttocks and legs, breaking the skin and leaving abrasions on his body.”

Jo’Maury cried out for his mother during the attack, to which Tyler yelled back “I am your mama,” the lawsuit alleges.

The boy’s classmates testified they could hear his cries from the classroom, WMAQ reports.

Tyler allegedly beat the Jo’Maury between 20 and 30 times with the belt, and slapped him twice with an open hand. After the attack, Tyler walked Jo’Maury back to Haynes’ classroom and gave the teacher back the belts. Jo’Maury “sat at his desk all morning and sobbed uncontrollably, publicly shamed and humiliated by the experience,” the lawsuit alleges.

Haynes, however, allegedly continued to taunt the child.

“Ms. Haynes … threatened, you better be good because the lady is going to come back at 1 p.m.,” Hofeld said.

A doctor has since diagnosed Jo’Maury with post-traumatic stress disorder and he’s “expected to require extensive, long-term psychotherapy,” according to the lawsuit.

“Every student deserves a safe learning environment and the district will not tolerate actions that place students in the way of harm,” Bolton wrote. “After learning of deeply concerning allegations, the district removed the employee from her position and launched a full investigation.” 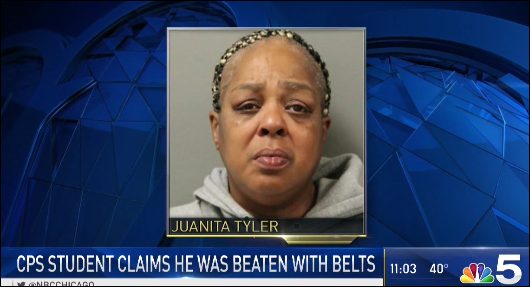 “I think that’s wrong. Shouldn’t nobody – shouldn’t no teacher bring anybody in to whup any kid,” Tilson parent Rebecca Perkins told WLS. “Should be fired.”

Tyler previously served as a foster parent but the state removed the children in her care over repeated concerns, according to the Tribune.

The lawsuit, filed in federal court, seeks unspecified compensation and punitive damages, as well as support for Jo’Maury, who continues to face harassment at school, Hofeld said.

“Despite serious risk of re-traumatization, (the boy) has returned to Tilton because CPS refuses to pay for transportation to a new school, a cost his mother cannot afford,” Hofeld wrote in a news release. “Since his return, (Jo’Maury) continues to feel unsafe, students have bullied him while a teacher laughed, and his new homeroom teacher treats him with impatience.”