Colleges are expelling and rescinding admission offers to students who express the wrong opinion about the death of George Floyd or the violent protests across the country, while faculty who step 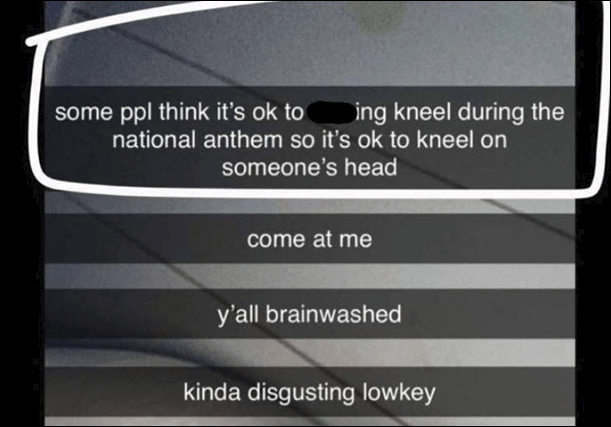 out of line are forced to resign.

Officials at the University of South Carolina, Missouri State, the College of Charleston, Temple University, The Citadel, Weber State University, Marquette University and others are fielding complaints about students and staff making inappropriate or “racist” comments about Floyd’s recent death while in Minneapolis police custody.

And in most cases, they’ve taken swift action against folks who don’t support protestors and looters that have ravaged cities across the country in the weeks since.

The University of South Carolina expelled a student responsible for a racist social media post and Marquette University withdrew an admission offer to a student for the same reason, reported WIS News and the Milwaukee Journal Sentinel.

At Missouri State University, two incoming students who also made racially inflammatory posts withdrew from the university, even though university president Clif Smart decided he wouldn’t rescind their offers of admission. In South Carolina, the College of Charleston rescinded an offer of admission to a student who wrote a racist social media post, the institution said in a statement.

Meanwhile, Temple University has “reported” a student to concerned authorities for a racist video. At The Citadel, the Military College of South Carolina, authorities are investigating a racist comment posted by a student. And at Weber State University, a professor resigned after his offensive comments about those protesting the killing of George Floyd angered many.

The Marquette University ordeal involved senior Leah Zenk, who set to play lacrosse on scholarship for the school’s Division 1 program until the offer was rescinded in response to her allegedly racist Snapchat post, the Riverhead News-Review reports.

“some ppl think it’s ok to f**king kneel during the national anthem so it’s ok to kneel on somone’s head,” the message read. “come at me y’all brainwashed kinda disgusting lowkey”

Zenk contends her message was misconstrued.

“What happened to Mr. Floyd is terrible,” she wrote on Snapchat in an explanation. “I never said it wasn’t. What I wrote was worded poorly and then taken out of context. Kneeling on someone’s neck and kneeling during the National Anthem are both disturbing. The fact that Mr. Floyd died is horrible. Bu it is equally horrible that our servicemen and women die every day protecting this country along with preserving the rights that allow people to kneel if they want to and then gets taken for granted.

“I am a PROUD PATRIOT,” she wrote. “I will stand by my country and will apologize to no one for that. My deepest sympathies go out to the Floyd family and all the families whose lives have been turned upside down by what is happening in Minnesota.”

“I lost my glasses and my ankle is in searing pain after NYPD hit me in the face multiple times with riot shields and pushed me to the ground,” the reporter wrote. “I was backed away as a request, with my hands up. My NYPD-issued press badge was clearly visible. I’m just sitting here crying. This sucks.”

“Excellent,” Senjo responded, according to ABC4. “If I was the cop, you wouldn’t be able to tweet.”

School officials described the tweet as “hurtful and inconsistent with the values of Weber State University,” but denied any attempt to force Senjo out.

“The university had placed Senjo on paid leave June 2, in order to conduct a review of the situation,” according to a statement on the school website. “The university did not ask him to resign.”

“Those are my tweets but I don’t stand by them and will have to suffer the consequences of my recklessness,” Senjo wrote in an email to ABC4.

“I made those tweets in the sordid atmosphere of Twitter knife fights where sarcastic put-downs and tasteless humor are often the norm.  I failed to respect my role as a college professor in the hyper-emotional atmosphere of the recent police brutality protests.  I apologize for my Twitter contributions.  In the aggregate, they reflect a great deal of ugliness,” he stated.