ANAHEIM, Calif. – Parents recently voiced their concerns to the Ocean View School Board about a song a seventh-grade teacher authored about Islam that they believe is inappropriate.

Nichole Negron and her mother Susan Negron told school board members Nichole’s seventh grade son came home from Spring View Middle School recently with a song his teacher passed out in class about Islam. The women said the teacher told them she was simply using song to teach about Islam, but they contend it contains questionable language that seemingly promotes the religion, CBS Los Angeles reports.

The lyrics were set to “This is our fight song!” and read: 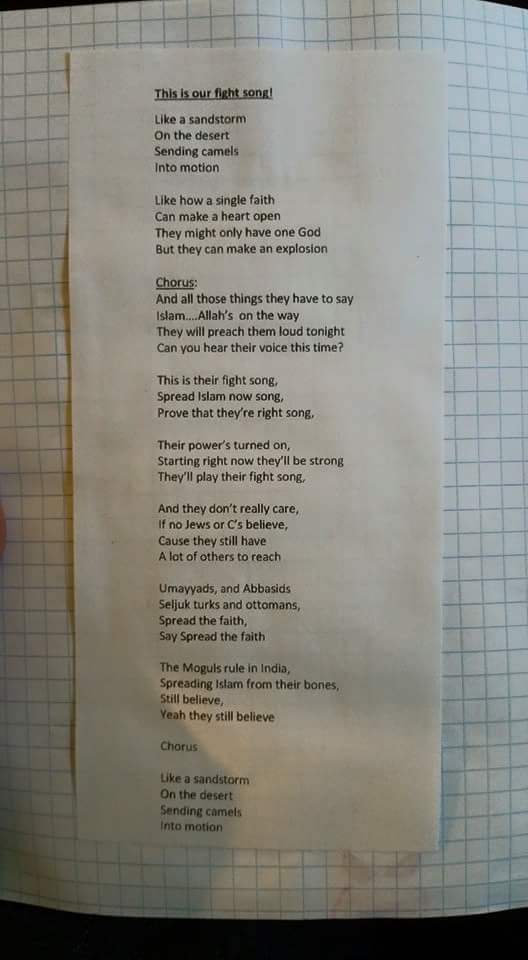 And all those things they have to say
Islam … Allah’s on the way
They will preach them loud tonight
Can you hear their voices this time?

And they don’t really care,
If no Jews or C’s believe,
Cause they still have
A lot of others to reach

The Moguls rule in India,
Spreading Islam from their bones,
Still believe,
Yeah they still believe

Like a sandstorm
On the desert
Sending camels
Into motion

Nichole Negron told Surf City Chronicles in a recorded interview that her son and his classmates sang the “Fight song” in class several times, and she wouldn’t have known about it if he hadn’t accidentally brought a journal home with him he’s not supposed to.

“The kids keep a journal in their class of what they’re learning. It’s like a study guide to help them study for their tests. When I was looking through it I came across a song that was rewritten from a popular song on the radio,” she said.

“It’s very concerning because the lyrics come off to me like preaching the religion and basically telling my son and other children to spread Allah’s word, and they should follow, and it’s very disturbing,” Negron said.

Negron spoke with the teacher and an assistant principal, but they essentially ignored her concerns, she said.

The teacher ”said … that she knew it might cause concern, yet she did it anyway,” Negron said. “She said she was just trying to prepare the students for the test …”

Negron said the assistant principal told her that if she was a strong Christian, the song wouldn’t be so offensive.

“I am a Christian,” Negron said, “but that shouldn’t matter.”

Negron also detailed other questionable items in her son’s study guide, including an apparent conversation between stick figures that seemingly cast Islam in a favorable light. She said the study guide was the first instance in which she’s questioned the curriculum.

“This is the first time, and I’m pretty involved in homework because I’m a stay-at-home mom,” she said.

Negron follows her son’s progress through a porthole online, and said because he had no missing assignments and was carrying a good grade, she didn’t ask too many questions. But when she noticed a missing assignment, she looked closer, and didn’t like what she saw.

“That, plus the book, … prompted me to start asking questions,” Negron told Surf City Chronicles.

The mother said she turned to social media, and addressed the school board, to alert other parents.

The response online was overwhelming, Negron said, with numerous comments within minutes of her post, which solicited advice on how she should handle her concerns.

“I feel like most of the people were supportive, and most understood what I was saying,” Negron said. “I wasn’t trying to damn the teacher … though I do believe she was at fault because she created it.”

“I just think she should have been more careful, and I think other parents agree.”

CBS Los Angeles reports the school district issued an apology for the assignment in a prepared statement, and vowed to investigate the issue.

The news site also contacted the Council for American Islamic Relations in regards to the assignment, and spokeswoman Ojaala Ahmed also questioned the appropriateness of the song.

“Especially with the recent attacks ISIS has been doing, knowing that this potentially Islamaphobic backlash might come about, what was the teacher’s intention,” Ahmed said.