Cambridge Christian School in Tampa and the University Christian School out of Jacksonville are playing in the District 2-A high school football championships today and coaches from both teams submitted a request to ensure a 30-second prayer over the loudspeaker before kickoff, Bay News 9 reports.

“The facility is a public facility, predominantly paid for with public tax dollars, makes the facility ‘off limits’ under federal guidelines and precedent court cases,” Dearing wrote in an emailed response to the teams. “In Florida Statutes, the FHSAA (host and coordinator of the event) is legally a ‘State Actor,’ we cannot legally permit or grant permission for such an activity.” 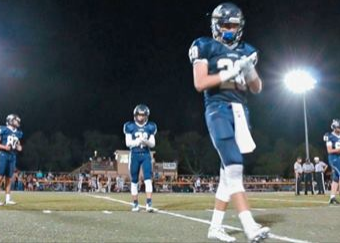 “We’ve played 13 football games this year,” he told Bay News 9 “We’ve prayed before every one of them.”

“Here’s the problem,” Euler told WTSP. “The Florida Legislature is opened up with prayer in a building that is paid by tax dollars. What is the difference?”

Euler said Friday morning, hours before the game’s 1 p.m. start time, that it’s unlikely the teams would be able to reverse the decision, but believes it’s important to highlight the problem, nonetheless.

“What we really want to do is raise awareness,” he told Bay News 9. “All we’re asking for is an opportunity for two Christian schools to pray.”

WTSP attempted to contact the Florida High School Athletic Association about the ruling, but the agency ignored its request.

WTSP reporter Mike Deeson posted about the controversy on Facebook.

“I was disappointed the Florida High School Athletic Association didn’t return our calls,” he wrote. “I wanted to know how the legislature opens with a prayer in a taxpayer owned building with state employees, yet FHSAA maintains a prayer couldn’t be said in a taxpayer funding facility the Citrus Bow that was sanctioned by state employees, members of FHSAA.

“Something doesn’t make sense when you compare the two … but they NEVER returned our calls,” Deeson posted. “In my opinion that was a BAD PR MOVE!”

Readers, of course, were enraged by the FHSAA’s decision.

“I think it’s absolutely ridiculous that they will not let two Christian schools pray before their game,” Mary Salvatore posted to Facebook. “And you wonder why we have so many mass shootings across the country!”

“So PC and so tolerant that you become intolerant,” Robert Rosengarten added. “Let them pray, who gives a f. If they want to pray to Jesus, Allah, the flying spaghetti monster, let them, who cares.”

“Who’s to stop them?” Daniel Suarez questioned. “What if both teams come together before the game and pray? What if all in the stands begin to pray? Who would it hurt?”