Students post ‘whites only’, ‘blacks only’ signs around school — as assignment

ELKHART, Ind. – A lesson on segregation landed an Indiana high school teacher on administrative leave after students posted “whites only” and “blacks only” signs near school bathrooms and drinking as part of social studies class.

Officials did not release the name of the Concord High School social studies teacher who Concord Community Schools Superintendent John Trout said was designed to “demonstrate the feel of government-sanctioned segregation that previously existed in portions of our country.” 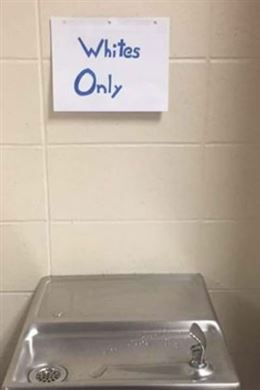 “Concord Community Schools appreciates its educators attempting to be innovative in their teaching approach,” the statement read, according to The Elkhart Truth. “However, methods and tactics that can be viewed as harassing or discriminatory to students and teachers are not appropriate and are prohibited in our schools.”

Trout said the assignment, given to students in a first hour class last Friday, was not approved by the school or school district. School officials removed the signs as soon as they realized, he said, and talked to students about the incident afterwards.

“Concord High School’s stated mission is to both academically challenge and equip our students. To that end, many of our high school educators include in their instruction current and historical events that may contain controversial subjects and topics,” according to the statement. “Unfortunately, like all of us, sometimes a teacher makes a mistake when attempting to educate young teenagers. On December 4, 2015, one such mistake was made.”

The teacher remains on paid administrative leave as the district continues its investigation.

Parent Martise Evans, a black woman, is really mad about the signs.

“Anybody can get any kind of wrong idea about it,” Evans told ABC 57. “Don’t do that. Especially don’t demonstrate that to other children to make it seem like that’s ok.”

Evans alleges he decided to pull her daughter London out of the district because of racially charged incidents school officials did nothing about.

“They were bullying because of her hair, because she’s African American, because she wasn’t up to their par of what they wanted her to be, or their definition of what a human being or person should be,” Evans said, “and they were teasing her to the (point) that she tried to commit suicide.”

Evans told ABC 57 she’s glad to see the teacher was suspended, and thinks the district should “reflect” on the incident.

“People’s feelings were hurt in the process,” she said. “People probably felt like the school doesn’t even want them there now.”

Several parents who commented on Facebook clearly disagreed with Evans.

“I support everything that this teacher did, except not getting approval from those above,” Dakarai Breveard wrote. “I think the intended lesson was great.”

“I could see this being a valuable teaching lesson if taught in a constructive manner,” Donny Wolf added. “It sounded to me like that was going to be the case. Unfortunately for this teacher, teachers are not allowed to actually teach anymore. They are told how to teach and what to teach from a manual.”