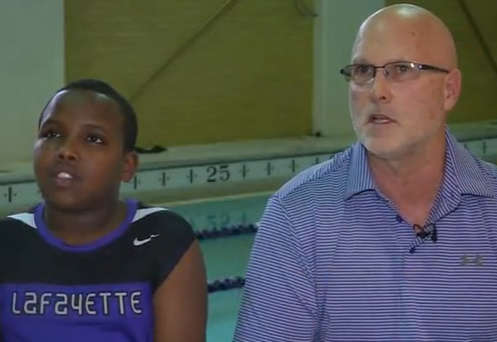 Sophomore Sahal Hussein swims on the varsity team for Lafayette High School, where the school’s 580 students speak 42 different languages, just months after the Somali native entered the pool for the first time in September, ABC 6 reports.

But for some reason Hussein set his sights on learning to swim, and progressed quickly enough to join the varsity squad that was recently resurrected by Reinhardt and head coach Dave Carver.

Carver told ABC 6 he was hesitant to include Hussein at first, but soon realized the sophomore was very determined.

“I said, ‘can he swim,’” Carver recalled. “She said, ‘Yeah, but in September he couldn’t.’ I said, ‘Wait a minute. We’re trying to do a varsity team here. He seems like a nice guy, but I don’t want to have him compete against other schools and be embarrassed.’”

“He was here every practice,” he said. “I think every kid … missed at least one. He hasn’t missed any. Since October we’ve seen him every day, five days a week.”

“I’m completely impressed with this guy. He’s amazing. He will swim until 6 o’clock at night if we let him. He doesn’t stop,” Carver said.

“I’ve been around swimming for quite awhile, and to see this boy swim 10 lengths of the pool with no trouble at all, my jaw just dropped,” she said. “It’s extremely hard to do.”

Dourlain said she felt compelled to praise his performance at the meet.

“He had the biggest smile on his face,” Dourlain said. “He just beamed. He made the whole pool area light up.”

Hussein told the news site there’s nowhere to swim in Somalia, and he’d never even seen an “American pool.” Neither ABC 6 nor News Channel 11 reported any details about when the thriving immigrant arrived, or why he came to the country.

“In my country, they have something, like, river,” Hussein said. “But it’s not swim like American swim. That like a lot of animals. You can’t swim there.”

He said his first few times in the pool freaked him out some.

“When I was jumping in the pool, I think I was feeling like the water was going in my mouth, something like I can’t swim,” he said. “I was thankful for my teacher.”