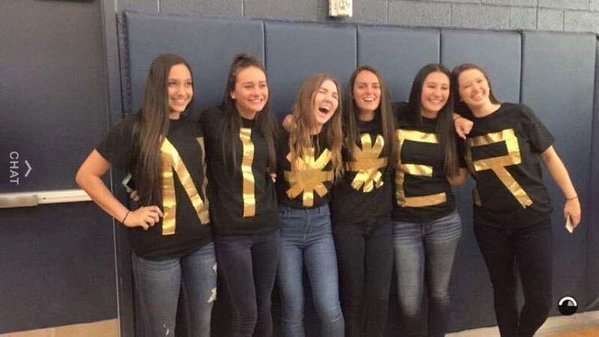 Afterwards, six girls got together for a different photo that spelled “Ni**er” and posted an image online that quickly went viral, Fox 8 reports.

“The six students in question pulled ranks to spell out NI**ER on their own, smiling gleefully to pose for an Instagram picture. Their punishment was 5-days suspension,” the petition reads. “This hurtful use of a racial slur is a complete disregard for the dignity of the black community in Arizona and across the nation and the punishment does not fit the total ignorance and cruelty of the crime.

“We demand for the resignation of the school’s principal, Christine Barela, immediately for deeming this 5-day vacation from school an acceptable punishment,” it continues. “The six girls in question need to be expelled from the high school and its district to understand the gravity of their actions to the fullest. These expressions of racism will not be tolerated any longer.”

AZCentral.com reports the picture was first posted to Snapchat, where images typically disappear after 24 hours, but it went viral when it was reposted to other social media, like Facebook and Twitter, on Friday.

Jill Hanks, executive director of community relations for the Temple Union High School District, stressed that the girls in the controversial image did not seek school approval for the picture, and officials took immediate action when alerted to the picture.

“That was not a school photo,” Hanks said.

“It was taken off to the side somewhere and I don’t know who took it or who posted it. We found out about it when everyone else did, when it popped up on social media,” she said. “They do not represent DV or the community as a whole. These are six students who made a really bad decision.

“They do not reflect the rest of the student body, the 3,100 other students that go here, staff that work here or anyone in our district,” Hanks said.

The Desert Vista Black Student Union and others sent out messages on social media to counter the negative attention.

“The incident that occurred today at Desert Vista High School does not reflect the beliefs of the student body!” DV BSU posted to Twitter, according to Fox 8.

“It is unacceptable for any racial slur to be used regardless of intent,” he wrote, according to ABC 15. “We need to understand that words matter.”

In a statement sent to parents, principal Barela wrote that school officials “share your outrage and disappointment of the actions of a handful of our students …

“We want to make it crystal clear those actions are unacceptable and will not be tolerated at Desert Vista. Those actions do not represent who we are as a campus,” she wrote. “We can assure you we will discipline these students in accordance with district policy and our student handbook. While we don’t discuss individual discipline, can cat tell you that in addition, the obvious need for sensitivity training will be addressed.”

Perhaps ironically, the school already had a sensitivity workshop planned for today called Challenge Day. The district website bills the event as a daylong program that “provides teens and adults with tools to tear down walls of separation, and inspires participants to live, study, and work in an encouraging environment of acceptance, love and respect,” AZCentral reports.