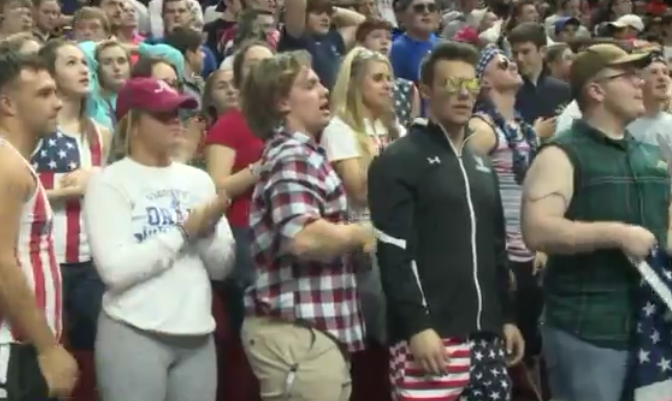 “Any normal person, any educated person can look at that and think ‘What the hell are these kids thinking?’” North assistant coach Morgan Wheat said.

Commenters on Facebook allege Valley students “were not being patriotic” but rather “rude, racist, and ignorant” by yelling “deport them” and other offensive comments from the stands.

“What they did was AGAINST the flag and what it stand for,” an alleged witness posted, according to Snopes. “Yes, there were kids that were not saying those things … but the majority were.”

Regardless, Valley student leaders issued a formal apology last week, and contend the red, white, and blue theme was not intended to offend anyone.

The students wrote, according to The Des Moines Register:

It has been brought to our attention that the decision by the Valley High School student section to wear U.S. A. apparel at our game last night was offensive to members of your community and fan base. We are deeply sorry if we have offended anyone in any way.

We have traditionally dressed in such a fashion for great games such as the one last night. Everyone here at Valley has immense respect not only for your team and players but for your community as a whole.

Please know that our intent was in no way (meant) to offend or demean – just to support our own team in a way we have done before.

Congratulations on a wonderful season and we wish you nothing but the best of luck in the future.

“They played hard,” Wheat told WHOTV. “We had a chance to win at the end. Hats off to Vally, they made more plays.”

North head coach Chad Ryan opted to focus on celebrating his school’s diversity, instead of speculating about the intentions of Valley students at the game.

“I don’t want to judge those young people not knowing their motives,” Ryan told the Register. “What I will say is we’re proud of our diversity at North High School – not only on our basketball team, but our population.”

Ryan also said he didn’t notice the controversy brewing in the stands.

“I get so into the game I block that stuff out,” he said.