GOLDEN, Colo. – A Jewish eighth-grader at Oberon Middle School in Jefferson County, Colorado was suspended for an inappropriate anti-Semitic joke with his Jewish classmate.

District officials contend the incident was outlined in an anonymous school survey that asked students about their experiences at the school this year, and they investigated the alleged hate crime. School officials told CBS Denver the boy responsible was suspended and barred from attending an awards presentation. 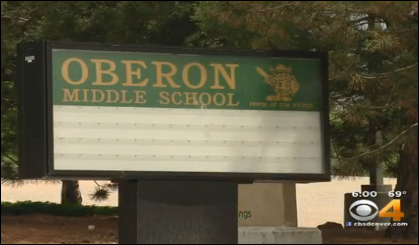 The news site reports one of the Jewish boys loosely tied the other to a soccer goal post at Oberon Middle Schools and told him to “burn, Jew, burn.”

“You don’t use ethnic slurs, racism isn’t okay in our schools,” Jefferson County Public Schools spokeswoman Diana Wilson said. “Any time this happens we are going to take action.”

The suspension comes after several allegations of anti-Semitism at the same middle school. One student told the district school board that she has to “constantly deal with anti-Semitism.” She also complained in a public forum about the incidents to Democratic Rep. Jared Polis, according to the report.

A student also complained that fellow students drew a swastika on his arm, and a teacher has complained about anti-Semitic incidents.

CBS Denver reports folks who initially contacted the news station described the incident as a “hate incident,” but later confirmed the boys are friends and both Jewish.

The school district, which is currently under federal investigation over the allegations of anti-Semitism in schools, has been making efforts to crack down on perceived religious harassment among students. School leaders suspended students at Mandalay Middle School for anti-Semitic comments and drawings.

A local high school principal also sent a letter to parents at the end of the school year to highlight similar problems that resulted in a school investigation and discipline for students.

“Jeffco public schools has had to deal with a number of incidents involving anti-Semitism this year and we would like to reach out to our community, parents, all of our community, and say this is unacceptable,” Wilson told CBS Denver.