He delivered that message to school officials and others at graduation ceremonies on Friday, when he ditched the four sentence statement administrators insisted he read, the Wilson Times reports. 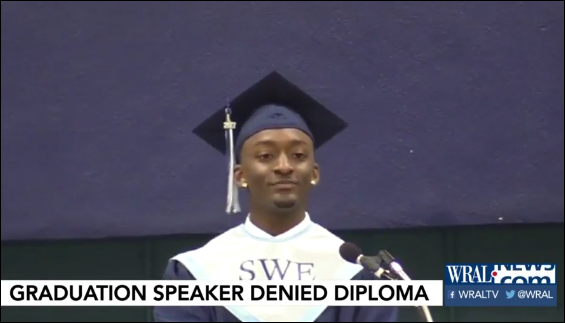 Instead, Wright went with a speech he worked weeks to prepare, and endured a petty punishment for sticking to his convictions.

“To be honest, the speech that they wrote wasn’t me at all,” Wright said of the prepared remarks. “I feel like they tried to belittle me in a way because I had more to say. I feel like they couldn’t describe the ways that I felt and the things that I experienced. There were only four sentences and I was like, ‘I really worked hard on this speech and as senior class president, I think I should read my own speech,’ and they was like, ‘No, this is what you are going to read.’”

“I think my classmates would like to hear what I have to say instead of the one you wrote for me,” Wright recalled for WRAL.

Wright explained to the Times how it unfolded.

“So it was time for me to speak at graduation and when I reached to get my folder off the podium, my speech wasn’t in there. It was the speech that they wrote. So the only copy I had of my speech was on my phone, so I took out my phone and read my speech,” he said.

Despite the troubles, Wright delivered a well-received speech that thanked those who helped students along the path in life and school and how it prepared Wright and his classmates to take the next step.

“I am no expert in this journey we call life, but we all have the ability to make a difference and to be that change the world needs,” Wright said. “The past 13 years have equipped us for a time as this to stand bold in who we are. So I say to my classmates, cherish these last few minutes we spend here and the memories we have created and get ready for the journey ahead.”

After the ceremony, as students picked up folders that contained their diploma, transcript and report card, Wright learned the punishment for failing to comply with orders.

“My folder wasn’t in the stack,” Wright told the Times.

His mother was fuming.

“(He said) ‘Mom, they took my diploma, they won’t give it to me,'” Jokita Wright said. “At that moment I was totally upset. I was upset.”

“I was upset and embarrassed,” Wright said. “All of the seniors was walking around with their bright orange folders and I, being the last one in my class, (was) walking out with nothing in my hand.”

“His diploma was taken…it was hurtful not only to him and his family, but to all of us,” classmate Jada Barnes told WRAL.

Later, the superintendent publicly apologized to Wright and his family, and Harris hand delivered the diploma to Wright at his home on Sunday.

“I have communicated with the family to apologize on behalf of the school,” said superintendent John Farrelly said. “The diploma never should have been taken from the student.”

“I appreciate it, but it would have meant more if the senior adviser and the principal had called me because they were the ones that caused it,” Wright told the Times.